Like many booklovers, I have a huge pile of books on my shelves (and on the floor, as it happens) waiting to be read, along with a few (or many) books that I have borrowed from the library.  Last night after I finished the book I was reading (Almost Home by Pam Jenoff -- very good!) I went to select my next book and - I was paralyzed with indecision!

How do I choose what to read next?  The book that was recently released and is receiving lots of positive buzz?  The book about a topic currently making headlines?  How about this one -- no, if I bring that to work I'll receive some funny looks (well, I do already, because I READ).  Or this library book that is due back next week - nah, I'm just not in the mood for it right now.

I have some books set aside for upcoming reading challenges and I've thought about organizing the to-read pile by month or something to make it more manageable (that's not the right word - I can't think of a better one though) but of course the pile is not static -- I am always adding to it and the bright shiny new book sometimes moves ahead of all the others who have been waiting patiently to be read.

So what did I decide on?  The book that has probably been on the to-read pile the longest:

The book has long since been released in paperback, but I have the hardcover, purchased during a visit to family in Winnipeg maybe a year and a half ago.
How do you decide what to read next?  Do you have a system?
Posted by Suzanne at 5:15 PM 3 comments:

April in Paris - What's in a Name Challenge

Almost three months into the year and I have finally completed a book for the What's in a Name Challenge!

April in Paris by Michael Wallner is set in World War II in occupied Paris and is about a young German soldier, Corporal Roth, who by day acts as a translator during interrogations of suspected French Resistance members and by night takes to the street in civilian clothes as Antoine, trying to enjoy the ambience of Paris (yes, even in wartime Paris appears to have it) as just another Frenchman as opposed to a soldier of the occupying army.

During his evening promenades, he encounters a Frenchwoman, Chantal, with whom he becomes infatuated and makes every effort to be with her or even just to see her.  He does not want her to know his true identity - for obvious reasons - but Chantal has secrets of her own that are best kept to herself; yet even so it seems like they know more about each other than they reveal.

I found the character of Corporal Roth interesting, if not entirely likeable.  At critical moments he seemed to have a conscience ; and I've not usually felt that with other German soldiers I've read about in novels.

The story in this novel was just ok - I never felt fully drawn into it - but I loved the descriptions of wartime Paris.

And a lighthearted warning -- if you do choose to read this book, be aware that you will be humming the song April in Paris even though it has nothing to do with the story!
Posted by Suzanne at 6:46 PM No comments:

I just realized that at the beginning of the year I had signed up for a few reading challenges and I have not done anything about them.  So what am I going to do - sign up for another one!

I came across fizzythoughts' blog today and in reading some recent entries I noticed a World Party Reading Challenge that she is starting in April.  As an avid reader and armchair traveller (a real traveller when I have a few extra pennies kicking around) this challenge is ideal for me.

I have read books on several of the countries selected (France, England, Ireland) and there are others about which I've read little or nothing (Liberia, Cambodia) so I'm excited to explore the libraries and bookshops for material.

I just took a look through my (massive) to-read pile and already have a few books ready to go:
April (France):   Paris Times Eight:  Finding Myself in the City of Dreams, by Deirdre Kelly
May (Communist Country):  The Knife Sharpener's Bell, by Rhea Tregebov
July (Rwanda):  Baking Cakes in Kigali, by Gaile Parkin
November (Turkey):  My Name is Red, by Orhan Pamuk
March (Ireland):  The Gathering, by Anne Enright
I have a few other books that I can use for December, which is a "choose your own" month, and I won't have any difficulty finding books for October (India) and February (England); but I'll need some help for June (Liberia), August (New Zealand), September (Native American tribe), and January (Cambodia).

Suggestions anyone?
Posted by Suzanne at 7:10 PM 2 comments:

Last year I took it upon myself to read In Search of Lost Time by Marcel Proust -- the whole thing.  It took me about nine months, and I can't say that I enjoyed the whole thing, but there are certainly sections that are wonderful; and now that I've read it I can see Proustian references in quite a number of other books.

I set up a group on Goodreads to discuss my progress through the novel and met some great people who read it along with me  (Cherlize and Ed, that's you!).  Now that we've conquered Proust, I brought up the prospect of taking up Ulysses by James Joyce -- others have taken it on and have already finished, while I'm still in the thinking about it stage --- NO MORE.

On June 16th - the day which the novel takes place - I am going to start reading Ulysses, a few pages a day, and post at least once a week on what I've read (thank you to Ti @ Book Chatter for the inspiration for this project - she read a few pages a day of Moby Dick and posted weekly).

Anyone out there brave enough to join me?
Posted by Suzanne at 6:25 PM 1 comment:

Welcome to today's stop on the Georgette Heyer Classic Circuit! 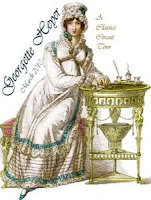 A country house.  Guests arriving for the weekend.  A host whom almost everyone dislikes for one reason or another.  An ideal set-up for a classic 1930s English murder mystery.
General Sir Arthur Billington Smith and his young wife, Fay, are entertaining a group of relatives and acquaintances at their home in the English countryside.  Among the guests are Fay's sister, Dinah Fawcett, the General's son Geoffrey and his fiance, Lola de Silva, the General's nephew Francis, Basil and Camilla Halliday, and Stephen Guest, who appears to have feelings for the young Mrs. Billington-Smith.  Several local neighbors join in the party at various times, including the local Vicar and his wife, and Mrs. Twining.
The General is not happy with just about everyone in his house, especially his son for bringing a woman of "questionable" character into his home and his own wife for extending the invitation in the first place.  After a morning obligatory socializing with some of his guests, the General retreats to his study to work on his household accounts.  Several hours later, he is found there slumped over his desk -- murdered.
Everyone is shocked at this violent event, but nobody is particularly upset at the General's death.  In fact, suspicion falls upon just about everyone in attendance at the house as each person had a reason to see the man dead.  A key piece of evidence at the scene - the unfinished clue of the title - is the beginning a word the General started before he died.
The Unfinished Clue had all of the key pieces of a classic murder mystery - an isolated setting, many suspects with motive and opportunity to commit the crime, and interesting characters that leave the reader (or at least this reader) guessing almost to the end who the murderer might be.  It was missing a strong investigator, in my opinion; Inspector Harding of Scotland Yard certainly did his job and solved the crime but he seemed like a background character.
This was my first Georgette Heyer novel, and I did enjoy it.  It reminded me a little bit of Agatha Christie's mysteries, which I loved; and I think given the opportunity I'd like to read more of Heyer's mysteries.
Posted by Suzanne at 6:00 AM 10 comments:

A book not quite ready for its time

I hate it when I start a book that I have been eagerly anticipating and don't feel pulled in right away.

Cutting for Stone has been on my to-read list for the last year, and when it was recently released in paperback I took the plunge and purchased it (well, it wasn't so brave as that -- not much incentive is needed to get me to buy a book).
I started it the other day and I'm about 120 pages in and -- I'm not sure that I enjoy it.  It's got me just enough to want to continue, but not enough that I want to stop everything else and keep reading.  I might give it another chapter or two before deciding whether to put it aside for the time being; but if anyone has read it -- can you give me a reason to keep on?

Do you have a book that you've been excited to read only to be disappointed with it?
Posted by Suzanne at 6:59 PM 1 comment:

In my last post I questioned myself on whether I might read too much since at that time I had read 20 books so far in 2010.  A few days later, I finished two books probably within the span of 12 hours (and that included a good night's sleep) -- very short ones, but extremely strong stories.
The first book was The Patience Stone by Atiq Rahimi which was mentioned by Ann Kingman on a recent Books on the Nightstand podcast.  In what seems to be Afghanistan, a young woman cares for her husband who lies in the middle of a room badly injured from a gunshot wound to his neck.  He cannot speak, and as she tends to him she talks to him about things she would never dream of sharing with him if he were well.   He in some ways becomes her patience stone - sang-e-saboor in Persian - a stone believed to take in the hurt and anguish of those who confide in it and which will one day explode with all of the pain it has absorbed.  Beautiful is not quite the word to describe it, but because the novel is short the language used is concise yet extremely vivid.  If you enjoyed The Kite Runner, you will also enjoy this book (in fact, Khaled Hosseini wrote an introduction to the English translation).
The second book was Ethan Frome by Edith Wharton, which is the March selection for my Classics reading group.  I had read a few of Wharton's other novels - The Age of Innocence and The House of Mirth - and was surprised at how different this one was.  It explores a completely different "class" of people in a very different setting.  I'm not sure how I feel about it after reading it, but I think it will prompt an interesting discussion.

Have you read any good short books lately?
Posted by Suzanne at 7:22 PM 1 comment: