The Queen of Palmyra 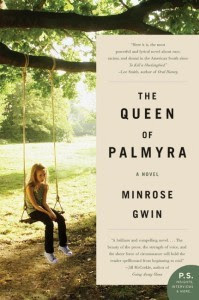 "Whatever story you want is yours as long as you can think up the picture you want to see and make somebody else want to see it too"  Florence Irene Forrest.
I grew up in Winnipeg, Manitoba, Canada, a city on the Prairies.  Most of the kids in my neighborhood were white; but there were black families in the area as well.  One family lived across the street and whenever a community game of tag or hide and seek was getting started their children were as welcome as any other kid on the block; frankly I found them exotic because the girl who was my age had OLDER brothers and sisters who went to HIGH SCHOOL (note:  I was seven or eight and the oldest child in my family -- this was a big deal!)
So when I read books such as The Queen of Palmyra, by Minrose Gwin, that describe racism as it was in the South not that long ago, I am thankful for my upbringing and also shocked that such hate existed merely because of skin color.  The novel is written from the perspective of Florence Irene Forrest, a young girl who because of circumstances spends much of her time with her grandparents' (black) maid, Zenobia.  Florence has preconceived notions of black people, the result of observing those around her, but as she spends more time with Zenie and especially upon the arrival of Zenie's niece Eva Greene, these notions fade and even though she is still young she sees that things just aren't right.
Things in Millwood, Mississippi, go bad fast, and the story for me became a gripping page turner.   I don't know that "enjoyed" is the right word to describe the feeling I had upon reading what were at times very unsettling scenes, but I was fascinated by the story Ms Gwin told.
I wasn't thrilled with the way the novel ended, but apart from that I enjoyed this book very much and highly recommend it.  If you liked The Help or Mudbound, as I did, then you will like this book as well.

Disclosure: Copy received from the publisher for review
Posted by Suzanne at 4:30 PM