A Long Long Time Ago & Essentially True by Brigid Pasulka is a novel with two stories told in alternating chapters; the stories are set about fifty years apart but linked by family and by the city of Krakow.
The first story takes place in the time between the late 1930s and late 1940s -  before, after and during, World War II.  A young man, known as Pigeon, sees a lovely young girl, Anielica, and rather than overtly courting her he offers his services as a carpenter to her father, restoring their home and winning the affections of both Anielica and her family.  As Pigeon had eight sisters, he felt he had some insight into the mind of girls such as Anielica:

The war of course puts everyone's life in the town of Half-Village into turmoil and no one is immune to its tragic effects.  Once the war is over, Pigeon and Anielica, along with Anielica's brother Wladislaw Jagiello, his wife Marysia, and their young daughter Irena, move to the city of Krakow with hopes of a better future.

The second story is set in the 1990s, after the fall of Communism in Poland.  Pigeon and Anielica's granddaughter -- called Baba Yaga through most of the book -- has also moved from Half-Village to Krakow with hopes for a better future, but with less certainty as to what her future may be.  She lives with Irena - her grandparents' niece - and her daughter Magda, and works a few jobs, but aside from movies does not have any real passion in her life.

When I first saw the title of this book, I thought of a fairy tale; and in some ways that is what this novel is.  It it is at times a wonderfully romantic love story, an unspeakably tragic one, and also comic.  Whether there is a true "happily ever after" ending I will let you decide for yourself, but you will not be lacking in an emotional reaction.

The city of Krakow plays a central role in this novel and I definitely would like to visit one day; but for now I will be happy with Brigid Pasulka's rich descriptions of the city as it was then and now: 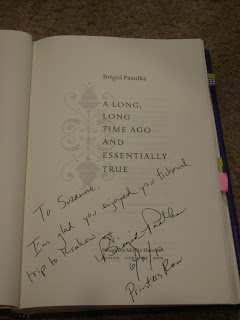 (signed at the Printers' Row Lit Fest in Chicago)
Posted by Suzanne at 5:30 PM