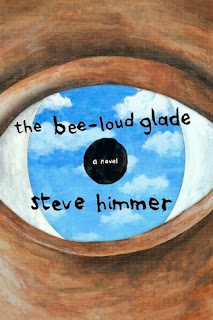 The Bee-Loud Glade by Steve Himmer﻿
Published:  2011 by Atticus Books
Source:  Purchased
It's been a while since I've mentioned the Books on the Nightstand Reading Retreat that I attended in April (best weekend ever), but after reading The Bee-Loud Glade I felt it deserved one more shout-out because without the retreat it is likely that I would have never picked this book up and that would be a shame.
The Bee-Loud Glade tells the story of Finch, a man of undetermined age (though probably between 25-35) who, after losing his job at Second Nature Modern Greenery falls into a funk and among other things starts answering spam e-mail he receives.  One of these e-mails is an employment ad:

Are you a quiet, contemplative nature enthusiast available for full-time employment?  This is the opportunity you have been waiting for and thought would never arrive.  We offer a competitive salary and excellent benefits, including all lodging and meals.  Daydreamers and introverts encouraged to apply.  May we assume you are interested?

A knock on his apartment door some days later starts Finch on his new career path as a decorative hermit in the gardens of Mr. Crane, a man with apparently too much money on his hands and who is running out of ways to spend it.

For an absurd amount of money (held for him until the end of his "employment" term of seven years), Finch is required to live in a cave in the garden, perform duties as requested by Mr. Crane, stop shaving, and stop talking.  As this was not a lot different from what Finch was doing in his period of unemployment, he takes the position.

Of course things aren't all cut and dry -- there wouldn't be much of a novel if they were.  Finch has some trouble with the true hermitic life at first, and Mr. Crane finds some very odd tasks for him to perform in order to remain amused.  And, in alternating chapters right from the beginning of the novel, we see Finch as the hermit later on -- which not entirely explained, creates more questions that probably needed a longer book to answer.

The Bee-Loud Glade is definitely a quirky book that might not be everyone's cup of tea, but I enjoyed it and as I mentioned it definitely would not have been a book I picked up on my own.  If you have ever worked in a corporate environment,  though, you will likely find something to relate to in Finch.

Recommended.
Posted by Suzanne at 6:00 AM