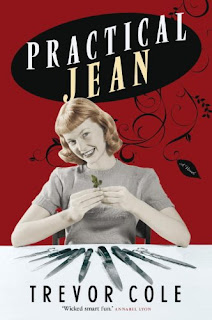 Practical Jean by Trevor Cole
Published:  2010 by McClelland & Stewart
Source:  Purchased
Jean Horemarsh is the kind of woman you wouldn't normally notice.  She lives a quiet life in Kotemee, the town in which she was born and raised; with her husband Milt and a group of close female friends, many of whom she has known virtually her entire life.
After spending three months caring for her mother in the last stages of cancer, though, Jean has an epiphany:
Death didn't have to be slow and agonizing and bleak.  Suffering was not a given.  A person could have a last poem.  And it wasn't something that had to come by chance.  That was the revelation.  It could be guaranteed.
With that, Jean takes on a project that she hopes will ensure her friends will not endure the same painful end as her mother.  Describing the plot any further I think would spoil the pleasures of this novel for a reader, but I think this quote from the prologue should give an indication of where this story will take you:

And here in Kotemee, all anyone can now say is, "Thank God I was never a good friend of Jean Vale Horemarsh."

Jean's intentions are certainly admirable, but they are unorthodox, and I think for that reason this book might not be everyone's cup of tea.  Practical Jean is a dark novel, yet humorous; and it made me think about death in a different way.

Recommended.
Posted by Suzanne at 6:00 AM