The Submission by Amy Waldman 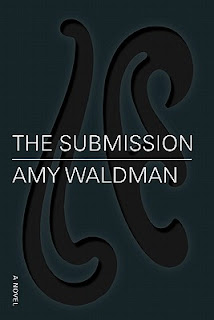 Few historical events have had the widespread impact of the attacks on September 11, 2001.  It seems everyone's life changed to some extent - from the minor inconveniences of airport security searches (my opinion:  they aren't a problem if you have nothing to hide) to the much greater effects of "average" Muslims being persecuted and the loss of family members and friends.  And it became an event that caused division and conflict, which Amy Waldman so wonderfully portrays in her novel, The Submission.

I loved this book.

The book opens about two years after the attacks, where a jury of artists and political appointees are reviewing blind submissions for a memorial to the attack that will be built in New York City.  One of the members of the jury - Claire Burwell, widowed due to the attacks and the only family member on the jury - aggressively fights for one of the entries, a garden design.  Eventually, the jury agrees with her and votes for the garden, but when the name of the winning designer is revealed, all are shocked to find out that he is Mohammed Khan, American born and raised, but Muslim.
So begins the conflict arising from this choice.  Although the jury is sworn to secrecy until they decide what to do about this issue, the name is leaked and Khan becomes a public figure to be denounced by anti-Muslim and 9/11 family groups and to be lauded by Muslim activists.  Mohammed (Mo, to his friends)  and Claire not only are the center of attention in this controversy, they are also conflicted within themselves, wavering between maintaining support for the garden or giving up and bow to the detractors.

Through the novel we see the issue from three other perspectives:  Sean Gallagher, the ne'er do well brother of a firefighter killed on 9/11 and who is now trying to do right by him; Asma Anwar, an illegal Bangladeshi immigrant whose husband - a custodian at the World Trade Center - was killed and who wants recognition of her loss; and Alyssa Spier, a journalist trying to establish her career on this story.  What I found so engaging about the novel is that Waldman weaves everyone's narratives together; so that even though you may be reading one perspective at a time, you also see one or more of the other characters and gain insight into their opinion as well.

As I read this book, I was at times happy, sad and angry.  The whole issue of what constitutes a proper memorial and who has the right to create it becomes polarizing rather than unifying.  One reviewer mentioned that she wavered back and forth on who she supported, and while I didn't do that I can completely understand that feeling.  The novel does not provide answers,  but it does show that ugliness can reveal itself anywhere.

Highly highly recommended (and it would be perfect for book group discussions)
﻿
Posted by Suzanne at 6:00 AM