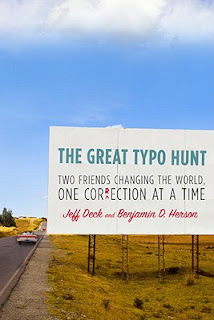 The Great Typo Hunt:  Two Friends Changing the World, One Correction at a Time by Jeff Deck and Benjamin D. Herson
Published:  2010 by Crown Publishers
Source:  Purchased﻿
I work for a company that sells its products by catalog, and one of my (many) responsibilities is to proofread said catalog before it heads to the printer each quarter.  Officially, I am only supposed to ensure item numbers and prices are correct, but I take it upon myself to also read through all of the copy to find any mistakes in spelling and/or punctuation (and since we sell equipment and supplies to auto body shops, the copy is not the most interesting reading, let me tell you).  Yeah, people might not notice if it's should really be its in a sentence, but I notice, and it bugs me when it goes uncorrected.
So it goes without saying that I loved The Great Typo Hunt.
Jeff Deck is a twenty-something with an ordinary desk job.  He attends his college reunion and, since the college is Dartmouth, listens to the many noble accomplishments of his classmates while lamenting the lack of his own.  After some thought he decides to take a road trip across the United States to raise awareness of typographical errors and to correct them whenever possible.   He is joined by several friends throughout the journey, but Benjamin Herson is his primary sidekick.
So they go about the country, searching for typos.  When they find one, they ask permission to correct it, and are met with a wide range of responses - from apologetic to downright hostile.  Through it all they also offer some thoughtful insight into the power of written communication and how much correct spelling does matter.
The road trip took place in early 2008, at the beginning of the United States Presidential election campaign.  The guys were in Atlanta and noticed a typo on a t-shirt supporting Barack Obama.  They politely mentioned it to the shopkeeper, who was embarassed and promised to fix it before the next production run.  The discussion then turned to the impact of race in the campaigns, and afterward Deck thought:

Slavery had been abolished from the United States a bare hundred and fifty years ago; segregation, not even fifty years ago! ... The scars were fresh, some of them still oozing.  Factors like typos could only infect the wounds.  In 2002, for instance, an African-American spokesman for the Congress of Racial Equality appeared on MSNBC.  His name was Niger Innis.  Picture the worst way you could misspell his first name onscreen.  Yeah, that actually happened. ... these errors were, I'm sure, completely unintentional, but they - and the outrage that followed each incident - speak to the dangers of carelessness ...

Now I'm a good speller, but reading this was further motivation for me to check my writing every single time.
Another civics lesson - a significant one - comes to pass for the primary members of TEAL (that is, the Typo Eradication Advancement League), one that I can't really understand, but I guess I'm not surprised by it either.
Yes, the problem of typos isn't the biggest one our world is facing at the moment, but it was entertaining to read about the efforts of these guys to make typos relate to those more important things.
Highly recommended.
(And I have checked this post three times for errors and made corrections, but if you've found one that I've missed, please let me know!)
Posted by Suzanne at 6:00 AM