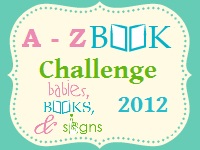 Another challenge for 2012!  The A to Z Book Challenge is hosted at Babies,Books and Signs and I found out about it thanks to Judith at leeswammes who seems to always know where everything is in the book blogosphere

The premise?  Very simple -- for each letter of the alphabet, read a book with a title beginning with that letter.  There are officially two options to join in on the challenge -- select your books ahead of time, or add books as you go through the year.  As I'm using reading challenges to whittle down the books on my to-read shelves, I'm doing a hybrid of the two.  Checking Mount TBR has already got me a decent head start:

A.  The Art of Losing by Rebecca Connell
B.  Broken Glass Park by Alina Bronsky
C.  The Cat's Table by Michael Ondaatje
D.  Dreams of My Russian Summers by Andrei Makine
E.  Extremely Loud & Incredibly Close by Jonathan Safran Foer
F.  The Frozen Rabbi by Steve Stern
G.  The Girl with No Shadow by Joanne Harris
H.  Heidegger's Glasses by Thaisa Frank
I.    Irma Voth by Miriam Toews
J.    Juliet by Anne Fortier
K
L.   Left Neglected by Lisa Genova
M.  My Name is Red by Orhan Pamuk
N.
O.  The Oracle of Stamboul by Michael David Lukas
P.   Postcards from a Dead Girl by Kirk Farber
Q.
R.  Rondo by Kazimierz Brandys
S.  The Slap by Christos Tsiolkas
T.  Triangle by Katharine Weber
U.  Unfinished Business by Lee Kravitz
V.
W.
X.  Annexed by Sharon Dogar  (X only has to be somewhere in the title)
Y.
Z.


Ok, a pretty good start.  I'm overlapping with a few other challenges, so I might actually get some completed in 2012!

Any suggestions for the missing letters in my list?
Posted by Suzanne at 9:53 AM