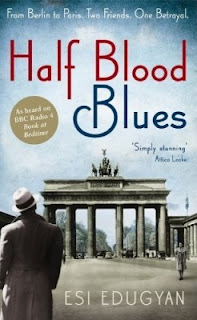 Half Blood Blues by Esi Edugyan
Published:  2011 by Serpent's Tail
Source:  Purchased at an independent bookstore

Paris, 1940.  Paris has fallen to the Nazis.  Anyone who can leave the city does.  A group of jazz musicians flee back to the U.S., knowing that they have left one of their own, trumpeter Hieronymous Falk - German and black - to an unknown fate after his arrest in a cafe.

In 1992, Sid Griffiths, the only witness to Falk's arrest, is preparing to head to Berlin with another bandmate, Chip Jones to attend the premiere of a documentary of Falk's brief and brilliant life.  ﻿Having long abandoned his jazz career, Griffiths is reluctant to go, but Chip convinces him.  And once Sid has committed to the trip, Chip reveals an ulterior motive -- Falk is alive and living in Poland.  This causes Sid's memories to come flooding back and to come to terms with what really happened all those years ago.  And so the story moves between the two periods.

In pre-war Berlin and wartime Paris, we see Sid, Chip, Hiero and their other bandmates working hard to "make it" as jazz musicians.  While in Berlin, they meet Delilah, an intriguing, mysterious woman who pulls Sid in all directions and creates in him a jealousy of Hiero, his much younger and more talented colleague.  That said, Sid is just as protective over "the kid" as anyone else, but Sid's ultimate goal is to make that one record that will shoot them all to stardom.

In 1992 Berlin, Chip and Sid attend the film screening,  but after Chip makes an astonishing revelation in the documentary about Hiero's disappearance, Sid storms out of the theater and is ready to head back to Baltimore, not wanting anything more to do with his so-called friend.  However, in a comedy of errors that Chip may or may not have staged, Sid once again reluctantly accompanies him, this time to Poland to seek out Hiero, and to right the wrong he committed back in Paris.

This novel interested me on a few levels.  As I'm drawn to WWII era novels anyway, I found this one - giving the perspective of black Americans in Europe - to be rather original (at least to me).  And the language used definitely created "the scene" for me; I could hear the way the characters spoke simply by the way Esi Edugyan wrote their dialogue.

The story?  Well, I guess it's sad -- having to live with such a burden for so long can't be good for anyone -- but the parts where Sid and Chip are travelling are pretty funny.  It's also heartwarming, but I can't explain why or that will spoil it for you.

This novel won the 2011 Giller Prize, Canada's highest literary honor.  I haven't read any of the other books shortlisted (yet -- a few are on Mount TBR), but I love the fact that a Canadian writer can still be considered as such when writing a novel with hardly any mention of Canada (Delilah is from Montreal, and that is the only Canadian reference I could find in the book).  (Just waving my patriotic flag).